8 Words That Ruined My Relationship by Patrick Gauthier

This week C’est La Vie Theatre brings you Patrick Gauthier’s play 8 Words That Ruined My Relationship, a short play about the things that drive people apart.

Listen to it here: 8 Words That Ruined My Relationship

Please make sure to leave your thoughts on the play in the comments section below.

Can you figure out which are the 8 words?

8 Words That Ruined My Relationship was written by Patrick Gauthier.

SHE was played by Megan Stewart

HE was played by Joel Fishbane

SOMEONE ELSE was played by Jayda Fogel

Sound engineering was done by Conor Wiese-Hansen, and Chana Ellman was the project manager.

The cast and crew was as follows:

The play was subsequently remounted in Ottawa, Ontario as part of the Meta Schmeta event, November 26-29, 2008, produced by Gruppo Rubato with the following cast and crew:

SOMEONE ELSE : Nancy Kenny

Interview with Patrick Gauthier about 8 Words That Ruined My Relationship 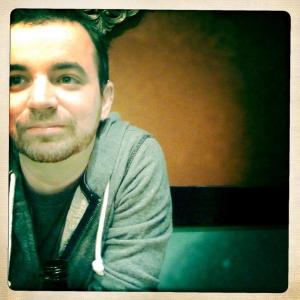 Where do you live?

Where are you from? Hometown?

I grew up in Guelph, Ontario; Kemptville, Ontario (in the Ottawa valley); and Guelph again, though I was born in Scarborough.

When did you start writing?

I started writing when I was a teenager.  I wrote my first play when I was in High School, which was co-written with a friend of mine.  It was my school’s Christmas play, which we called “A Family Christmas.”  I’m sure it played to rave reviews.

Language.  When I write I’m most interested in how people talk, and how the how affects the meaning and interpretation of what they’ve said.  Also: bears.

What inspired this play?

When I was completing my MFA in Vancouver I took Playwriting as part of my course work, and we were assigned a 15-20 minute piece as our major assignment for the first semester.  I had no idea where I was going to start (at the time everything I was working on was to be too long), and one night when I was trolling craigslist looking for furniture for my apartment I came across a post titled “Eight Rubber Ducks That Ruined My Relationship.”

The idea of the end of a relationship having a trigger event really interested me, and I started writing, using the title of the post as the play’s title (and even using the ducks).  Eventually through the writing process the ducks went away and the play became more about the fallout from the end of the relationship than the event that triggered it.

Do you have a day-job? What do you do other than writing?

I’m an Artistic Associate at the Great Canadian Theatre Company and Producer of GCTC’s undercurrents: theatre below the mainstream festival.  I’m also a freelance writer and director, and Artistic Director of Ottawa creation-company Gruppo Rubato.

What time of day do you write best?

I write best either first thing in thing in the morning or late at night (afternoons and evenings are for eating and napping).

If I’m writing in the morning I have to get out of bed, grab a glass of water, sit down and start.  No eating , no email, nothing else.  On a good day I can write for three or four hours without interruption, and will only stop when I ‘m too hungry  to keep going. Night writing sessions are less frequent now, but usually involve me starting only after everyone else in the house has gone to bed, and working until 3:00 or 4:00 in the morning, if I can stay awake that long.

How long did it take you to write this play?

The writing happened very fast – the bulk of the text was written in less than a week – but the full development probably lasted about two months.

What kind of support do you have for your writing?

I’ve been involved in a couple of playwright’s units, and my writing group at UBC.  I like to bounce my work off others, have them read it aloud, ask for specific feedback, etc.  When I’m not involved in a group or unit I have a few close friends I’ll send drafts to for feedback.  It’s an important part of my process.  I don’t believe you can create a play in isolation.

Do you have a website/blog? Can I contact you?

So you might be getting a little tired of me titling posts “Our First…” following by a succession of exclamation points. But I will not be able to do it for long, so humour me.

Gaëtan Charlebois, over at the Charlebois Post, is so speedy I think he may have secret time controlling tricks. I have not learned those tricks so I am a a few days late in getting this up. Anyway all of that to say, he has reviewed Prisoner’s Dilemma:

I encourage you to check it out, and post your own thoughts about it here.

Listen to it here: Prisoner’s Dilemma

Claire was played by Gabriela Saltiel

Sarah was played by Megan Stewart

The guard was played by Daniel Ruppel

Sound engineering was done by Conor Wiese-Hansen, and Chana Ellman was the project manager.

The Playwright, Sterling, encourages you to live tweet your impressions as you listen. Tweet @sterlinglynch and include the hashtag #PDpod.

If you enjoy the play, you will also enjoy his blog. Check out www.sterlinglynch.com.

Sarah’s Interview with Upstage on CKUT

So last Thursday I had the pleasure of meeting Eric Sukhu AKA @DeliciousEric if you are on Twitter. We had a lot of fun chatting about C’est La Vie Theatre on Upstage. So just in case you were not in Montreal and missed it, The Charlebois Post has posted a print version here.

Or you can listen to it: Sarah’s Upstage Interview.

Don’t Forget– tomorrow is the launch of Prisoner’s Dilemma! Only one more day so hold on to your seats!

Don’t be a Tease!

Here is a little something to whet your appetite for next week, and to make sure our technology is working! If you like what you hear, then please subscribe!  C’est La Vie Teaser

This picture is what Chana our project manager thought.

Just a little something to whet your appetite, in preparation for next week’s podcast: Prisoner’s Dilemma.

I wrote Prisoner’s Dilemma for a bunch of reasons. There are many more female actors than interesting roles for them to play; so I’m always on the look out for ideas that give me an excuse to write interesting female characters. Some philosophers claim that females employ a fundamentally different form of moral reasoning and I think that’s totally false. I attended a talk on the dilemma given by a leading expert in rational choice theory and his inability to recognize the actual cause of the dilemma was dumbfounding. A woman from the floor nailed it: “Clearly your definition of rational is wrong.” I also think it’s a mistake to tell people they will always be rewarded in the end for doing the right thing.

I had these ideas on slow boil in the back of my head when I performed at the 2001 Toronto Fringe Festival and discovered the twenty-four hour writing contest. The inspiration items worked with the beginning, middle, and end roughly implied by the Dilemma, I went to work, and twenty-some hours later I had a play. I didn’t win the contest. A couple of years later I reread the play, liked it, and fleshed it out a bit.

Hidden Insanity Theatre, a company I performed with when I was in Calgary working on my M.A. in Philosophy, was the first to produce it at the Pumphouse Theatre in 2006. The director was Amanda Chapman and, unfortunately, the record of who was in the show was lost somewhere along the way. I didn’t get to see the production because I was living in New Zealand, finishing my Ph.D. in Philosophy. In 2010, Wayne Current produced and directed the play for the Ottawa Fringe and it featured Nadine Thornhill, Brianne Tucker, and Jody Haucke. I saw it and enjoyed it!

Because people often have strong opinions about the play (there’s too much X, not enough Y, and what’s with the Z?), whenever I reread it, I’m always a little worried that maybe in the end I will decide I don’t like it. Fortunately, that hasn’t happened yet.

If you enjoy the play, you will enjoy my blog (www.sterlinglynch.com) and I’m on Twitter (@SterlingLynch). If you think there’s anything in the play worth talking about, I’m always happy to have that conversation with you!

Prisoner’s Dilemma will air on next week on C’est La Vie’s Podcast. So make sure to subscribe so that you get it!